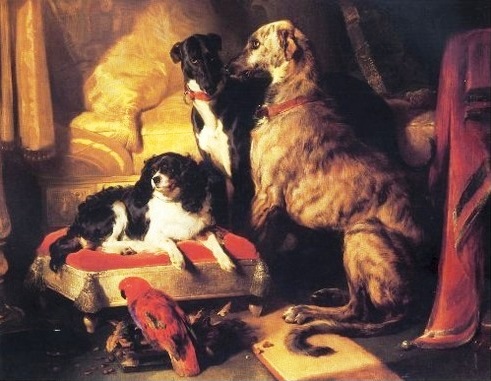 Queen Victoria’s love of animals is well documented. Her teenage isolation was certainly helped by the likes of her beloved Dash, a King Charles spaniel, and over the years she came to appropriate a whole variety of other companions, including a number of parrots that Lord Melbourne enjoyed speaking to. As a long-standing monarch, she was also presented with a wide range of both common and exotic animals from visiting foreign royals and dignitaries, some of which had to be passed on to zoos.

There is no doubt that she had a particular fondness for dogs. By 1839, she had so many that when Victoria discussed getting another, Lord Melbourne retored that she was in danger of being ‘smothered’ by them. The Queen certainly had an affinity for the smaller varieties and one of her favourites was undoubtedly her ‘darling’, ‘sweet’ or ‘dear’ Dash (or ‘Dashy’), a spaniel of ‘perfection’ given to her mother by Sir John Stanly. In April 1834, she not only described him as ‘such a beauty’, but also as being ‘so attached and so merry too’. Dash would often play with the other dogs of those Victoria visited and the news of the spaniel’s death on Christmas eve of 1840 ‘grieved’ her ‘so much’.

She wrote about many of her other canine companions in her journal. Albert was closest to Eos, a dog Victoria described as a ‘charming black greyhound’ who became his ‘constant and faith companion for 10 1/2 years’. She had been acquired as a six-month old puppy and was ‘connected with the happiest years of his life’. The ‘beautiful and sweet creature’ was also popular in the wider household as she ‘used to play so much with the Children, and be so full of tricks’. Unfortunately, in January 1842, two accidents befell the greyhounds. Not only did Mishka break her leg, causing her to howl dreadfully, but later in the month Eos, her mother, was nearly killed in a hunting accident after she was mistakenly shot and injured in the lung by Victoria’s Uncle Ferdinand. Fortunately she had recovered by March and the Queen was relieved to see her playing happily with their beloved Skye Terrier, Cairnach.

The dog that received the most attention in Victoria’s journals was Islay, another Skye Terrier, who was a gentle and good natured companion that she received in 1839. Sadly, both Cairnach and Islay died in April 1844 and it is likely that the condition may have been related, as both suffered from fits prior to passing away. Understandibly, their demise in the same month led Victoria to express concern for Dandie (of the same breed) and Eos. Fortunately, her fears for the former, who had been a gift from Albert in 1842, were unfounded. He enjoyed a long, faithful and devoted existence. Described by Victoria as the ‘greatest beauty of his kind’, he would follow Victoria around ‘like a shadow’ before passing away in January 1858. Eos was not so fortunate, however, as she only outlived Dash and Islay by three months (to July 1844) and after being buried, a memorial statue was created, which was placed in Balmoral.

Indeed, a number of their four-legged companions were commemorated in a grander fashion, including Cairnach. Dash’s even encouraged visitors to emulate his character:

His attachment was without selfishness, His playfulness without malice, His fidelity without deceit. READER, if you would live beloved and die regretted, profit by the example of DASH

Many others were immortalised in portraits, models and photographs. In 1838, for example, Edwin Landseer, who drew a number of the animals in the royal household, produced ‘Her Majesty’s Favourite Pets‘ (see image), a painting of Dash, Nero (greyhound) and Hector (deerhound) – not to mention Lory, the parrot.

Those mentioned above may have been some of their favourite animals in the earlier years of her reign, but it is clear from her journal that there were many others. Victoria regularly visited the kennels, especially when puppies had been born, and she often affectionately mentioned those inside. In August 1841, for example, she mentioned Pepper, a Scotch Terrier puppy, a young stag hound that she had recently been given, the Saint Bernards, who had just had a litter, and Albert’s seven beagles. There were subsequently too many of the latter, as in January 1844, Victoria oversaw getting rid of some of the ‘unnecessary’ ones, including some Scotch Terriers. As that suggests, some of those in the kennels had functional roles associated with hunting.

From the 1850s onwards, there were many other instances of dogs being mentioned by name, as well as numerous breeds being referred to that had produced litters, such as pugs, dachshunds, collies, deerhounds and foxhounds, as well as ‘Italian puppies’ (probably Pomeranians) and ‘Chinese dogs’ (probably Pekanese). Two of the prominent animals in the mid-Victorian period were Sharp (1866-1879) and Noble (1871-1887), who on their respective memorials – the former at Windsor and the latter at Balmoral – were both described as being ‘faithful’ and her ‘favourite collie’.

Towards the end of her reign (1894) there was a more detailed description of the Windsor kennels by Frank Carpenter (see below). It shows that not only did they house fifty-five dogs at that point, but that the Queen continued to have her favourites, some of which were painted by Charles Barber.

The account mentions the fame of Gina, but at the end of Victoria’s life Turi, the pomeranian, was a particularly close companion, who not only had the honour of sometimes sharing her carriage, but was also reportedly called for when the Queen was on her deathbed. As for corgis, they may be associated with blue blood today, but it was George VI who introduced them into the royal household and, as a result, they went on to become a favourite breed of Queen Elizabeth II.

Some of the finest dogs in the world are owned by Victoria, Queen of England. Her Majesty is particularly fond of animals, and she loves every species of dog, from the largest St. Bernard to the tiny King Charles spaniel, which can be put into a coat pocket. There is a man at Windsor Castle who does nothing else but take care of the dogs, and the royal kennels there are of stone, and the yards are paved with red and blue tiles, and the compartments in which the little dogs sleep are warmed with hot water, and they have the freshest and cleanest of straw in which to lie. There are fifty-five dogs in these kennels, and almost all of them are acquainted with the Queen. She visits them often while she is at the castle, and she looks carefully after their health and comforts. The dogs of Windsor Castle keep regular hours. They are turned out at a certain time each day for their exercise and sports, and they have a number of courts connected with the kennels upon which they scamper to and fro over green lawns. There are umbrella-like affairs on these lawns, where they can lie in the shade if they wish to, and in some of them there are pools of water where the dogs can take a bath, and in which they swim and come out and shake themselves just as though they were ordinary yellow dogs rather than royal puppies. The Queen has her favorites among the dogs, and some of them become jealous of the attentions she pays to others. Among those she likes best is one named “Marco.” This is said to be the finest Spitz dog in England. It has taken a number of prizes. Marco is an auburn dog. His hair is of tawny red. He weighs just about twelve pounds, and he has brighter eyes, quicker motions, and a sharper bark than any other dog in the kennel. He is just three years old, and he carries his tail over his back as though he owned the whole establishment. The Queen’s collies are very ﬁne, and a number of them are white. One of these is called “Snowball,” and another goes by the name of “Lily.” Another little dog, an especial favorite with the Queen, weighs just seven and one half pounds, or no more than the smallest baby. This is the Queen’s toy Pomeranian “Gina,” who is one of the most famous dogs of the world. Gina came from Italy, and has won a number of prizes at the dog-shows of England. Gina is a very good dog, and sat as quiet as a mouse while her photograph was taken not long ago. Among the other dogs of the kennel are a number of pugs, and one knock-kneed little Japanese pug which the late Lady Brassey, the distinguished traveler, presented to the Queen. There are big German dachshunds and little Skye terriers, and, in short, every kind of beautiful dog you can imagine in these famous kennels. The Queen names all the dogs herself; and near the kennels is a little graveyard where these pets are buried when they die.