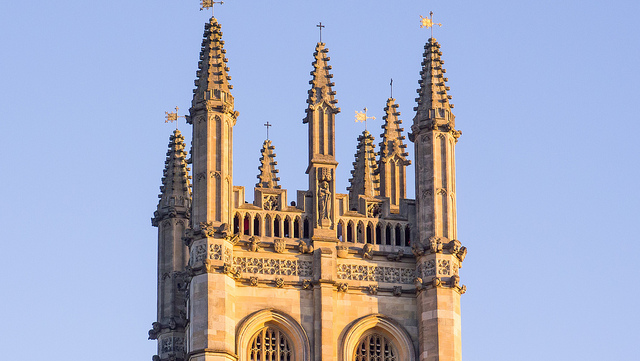 There are many traditions associated with Oxford, but one of the best-known and much-loved annual events is May Morning. The festival occurs on 1 May and involves a crowd congregating by Magdalen Tower to hear the college choir singing at 6 o’clock in the morning, before all kinds of revelry associated with the celebration of May Day break out.

Despite it being an age-old tradition – and being held ‘virtually’ for the first time in 2020, because of the COVID-19 outbreak – much of the history of May Morning is still shrouded in considerable doubt. It is sometimes said, for example, that Magdalen College Choir has been participating in the festivities – as immortalised by Holman Hunt in 1890 – for over 500 years, but can such a claim be substantiated? This article explores what we know about the origin of this popular annual event and how it has developed over time.

Origins of May Morning

It is not uncommon to hear that the festival has either an ecclesiastical origin or that it has pagan connections. There is evidence to suggest that singing has taken place on Magdalen Tower on May Morning since at least the late seventeenth century. A guidebook of 1817 suggested that it was done

in lieu of a requiem, which, before the Reformation, was performed in the same place for the soul of Henry VII. The rectory of Slimbridge, in Gloucestershire, is charged with an annual payment of ten pounds for the performance of this service.

The college had received the advowson (the right to nominate a priest) of the living in Slimbridge from Lord Berkeley in 1484 in return for daily prayers and keeping an obit for him after his death. Henry VII then inherited the estate and allowed Magdalen to keep the advowson in return for the same service being accorded him, albeit with the prayer offered annually instead of daily (on 3 or 4 October). The college also succesfully petitioned to be paid £10 a year from the Slimbridge tithes, which subsequently went towards funding the May Day ceremony.

Magdalen Tower was built between 1492 and 1508-9 and it is possible that some kind of dedication on a May Day could have occurred (the bells being installed in 1504-5). The earliest reference to an annual ceremony there on 1 May was made by Anthony Wood in 1674. He claimed there was an ancient custom involving the choral ministers saluting Flora with ‘vocal music of several parts’. This joyful entertainment was said to have given ‘great content to the neighbourhood, and auditors underneath’. Yet in 1688, during the college’s dispute with James II, the tradition did not occur at all for ‘want of choristers and clerks’. By 1749, John Pointer confirmed that the event, which had originally involved a requiem being sung for Henry VII’s soul, had become a merry May-day concert. It started at 4 o’clock in the morning and lasted nearly two hours, before being concluded with the ringing of the tower’s bells. That may well have been the kind of proceedings that continued until the end of the eighteenth century.

The hymn Te Deum patrem colimus (‘We worship you, O God the Father’) was written by organist and choirmaster (1665-86), Benjamin Rogers, and was regularly used in the college as its ‘after grace’ (the words thought to have been written by Thomas Smith, Fellow of the college from 1666-92). It is unclear when this was added to the May Day ceremony. Dr Routh, President from 1791-1854, suggested it had previously been accidentally introduced, when only the choir and the organist showed up. The latter supposedly made them sing the hymn, although it wasn’t until around the 1790s that it started to assume a more central role in the proceedings.

One of the most influential accounts about the event came from Revd J. R. Bloxam, Fellow of Magdalen from 1835-63, who recalled that in the early eighteenth century the ceremony had became unruly and ‘irreverent’. The main appeal for the choristers appeared to be the opportunity of throwing rotten eggs down on those below, an issue that was tackled by the principal porter tapping their pockets before they climbed the stairs. More regimented rules were implemented in 1844, which included certain protocols, like choristers wearing surpluses. Bloxam was a tractarian who wanted to focus the attention back on the religious significance of the ceremony. Although he is often credited with reviving that part of the proceedings, by the middle of the Victorian period there was also more speculation about whether the event had had some pagan connections.

The ceremony was certainly popular by the 1860s, as it had become a notable social event attended by old scholars, many of whom wanted to hear the singing. Tickets were introduced to limit the numbers, but in 1869 there were still said to have been at least 200 on the tower, including ‘a large number of ladies’ among the spectators. It was also attended by royalty, such as Prince Hassan of Egypt in 1872 and Queen Victoria’s youngest son, Prince Leopold, the following year.

A town or gown event?

Oxford has a long history of tensions between town and gown and there was certainly some antagonism between the sides when it came to May Morning. The Magdalen ceremony was viewed by some as being essentially a college event for those who were above – in both senses of the word – the masses below. This sense of divide was not helped by a period in which the townsfolk used May horns to try to drown out the proceedings on the tower. The instruments were around from at least the early eighteenth century, although it was not until the nineteenth century that they were deployed in a more confrontational manner. The practice was dying out by the end of the Victorian period, however, partly because the police had started to clamp down on the excessive noise that was being produced so early in the morning. By that point, the event had become associated with all kinds of other revelry, like Jack-in-the-Greens, children wearing garlands – one of a variety of ways to solicit money – and companies parading decorated horse and carts around the area. Indeed, a number of newspapers commented that the widening range of pastimes connected with May Morning was testament to the growing popularity and prowess of the festival.

Morris dancing was only introduced in 1923 and it was not until the late 1960s that burgeoning numbers of spectators helped the whole affair take on a much more ‘bizarre and colourful’ character. By the 1980s, the festivities had spread out across much of the city and they included ‘Scottish dancing, Maypole dancing, Street Theatre, Baroque Music, Madrigals, Jazz, Barber Shop Quartets, Juggling, Punch and Judy, Mobile Discos, and so on…’

The meaning of May Morning

May Morning is an event that has been enjoyed in Oxford for centuries and it is clear that it has meant different things to different people at different times. It has been hailed for its religious, pagan and even patriotic significance, but many people today are oblivious of its past and are simply happy to celebrate it as one of the many long established local traditions. Indeed, although jumping into the river Cherwell from Magdalen Bridge was a more recent (and now outlawed) activity connected with May Morning, it will be intriguing to see how the pastimes surrounding the festival continue to evolve over time, as they remain an important part of what gives Oxford some of its charm.