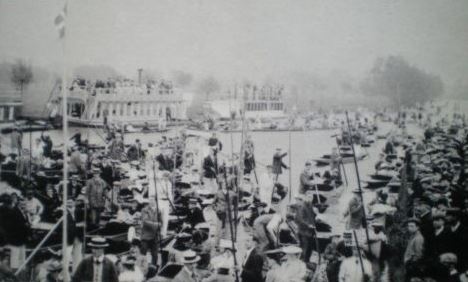 E. J. Hobsbawm and T. O. Ranger popularised the term ‘invented tradition‘ to describe practices that are relatively recent and yet are passed off or considered to be age-old activities. The term is often applied to the development of nationalism and there can sometimes be a (similarly artificial) distinction made between what is supposedly modern and traditional.

Although they were not all deceptively passed off as age-old practices, there are a number of ‘invented traditions’ associated with Oxford that only date from 1850 to 1920 and yet are mistakenly believed to be ancient. Paul Deslandes identifies a number of these associated with the university, including May balls, annual exams for degrees and the Oxbridge ‘manner’. Yet there are also others activities that he did not mention that would certainly fit the description and they include punting and some of the activities surrounding May Morning.

Punting is now considered to be one of the quintessential activities associated with Oxford, but it was one of many types of pleasure boating that were popular in the Victorian period in the city. The craft was originally a working boat used on shallow waters and a number of design changes towards the end of the nineteenth century helped it become more fashionable. These were the introduction of saloon seating in the centre (making it more sociable), the narrowing of its design (making it more maneuverable) and its construction from tropical hardwoods (making it more attractive). The pastime was more closely connected with the smaller Cherwell river, whereas on the Thames in the late Victorian and Edwardian periods canoeing was more popular than punting. The latter became much more widespread in the city on the larger river as well in the interwar period, partly because of the fashion for renting out tent punts that were used for camping. A reduction of punting elsewhere in the country also helped the pastime become more closely associated with the mystique of Oxbridge life.

May Morning is considered to be a tradition that stretches back over 500 years, but the festival has developed considerably over time. It is said that the choral singing became more reverent in 1844, for example, thanks to a number of new rules being established. By the end of the nineteenth century, the event was also associated with the (loud) blowing of May Horns, the appearance of a ‘Jack in the Green’, companies parading decorated horse and carts, and children carrying garlands. The latter would try to solicit money from people door-to-door. As this suggests, the occasion was quite different from today. Jumping into the Cherwell river (or attempting to do so!) is of course a recent and now outlawed ‘tradition’!

You can read about more about the development of punting in the book, Pleasure Boating on the Thames, and there will be more about the history of May Morning in a future post.