The Salter family was one of the most important boat building firms connected with the sport of rowing. Their firm rose to prominence in the mid-Victorian period and the following timeline shows the development of this side of the business. At the time it ended racing boat construction (in the late 1980s), the business was the oldest racing boat builder in the world, the constructor with the longest association with the boat race (1857-1976) and the firm with the most record times in the contest (four).

James and Elizabeth Salter take over a waterside tavern ('The Feathers') in Wandsworth, which was a key training establishment for the sport of rowing

Their sons (including Harry, John and Stephen) regularly compete in professional races

Stephen wins the apprentice sculls at the Thames National Regatta

John and Stephen move to Oxford to tap into the university rowing scene (Harry remains in Wandsworth). The firm provides a range of services for the colleges

The Oxford business is the country's leading racing boat builder. Salter-built craft win the boat race for Oxford from 1860-9 (and are used by Cambridge on many occasions too) and are successful in all of the major competitions at the time. The firm distributes the craft widely around the UK, as well as internationally. They also build the umpire eights used in the Henley Regatta

Oxford sets the first of three new record times for the boat race in the decade, all in Salters'-built eights (the others being in 1868 and 1869)

Ill-health forces Stephen (who was in charge of the racing boat side of the business) to retire and the Eton yard is closed.

The firm continues to provide services for the rowing crews, but they become slowly marginalised from the sport. The fastest craft become increasingly uncompetitive and as the business focuses more on the pleasure boating market, whilst the Oxford colleges move to providing more of their services in house

The business invests in racing boat building once again - most notably by employing Ted Wilde, who had built eights for the leading British firm of George Sims

Salters' builds the boat for Oxford University (the last wooden craft used in the contest), which wins the boat race in a record time (16:58)

The introduction of carbon fibre eights in the boat race spells the end for wooden racing boat building. The firm slowly declines, as it does not have the expertise to embrace the new material 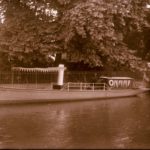